How a Growing Network of Activists Works to Finance the Future 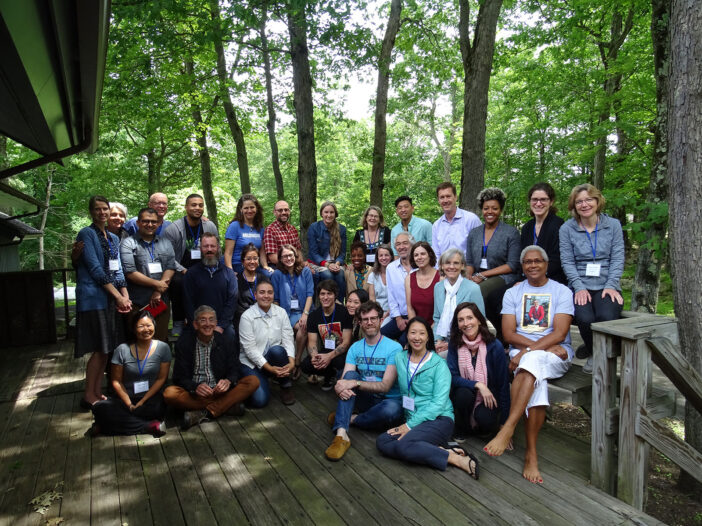 When we look back one day at how the tides of economic and racial injustice were shifted, we’ll see the handprints of a network of financial activists. Gaining in power and reach year by year, this force rising from the Integrated Capital Institute is shifting growing amounts of financial and social capital—along with control of those resources—to communities that have faced persistent exclusion and discrimination.

RSF Social Finance created the ICI in 2017 with the goal of training a diverse corps of financial advisors, investors, philanthropists and community leaders to challenge assumptions about the best uses of money, collaborate effectively with people coming from radically different contexts and apply an integrated capital approach to systemic problems. The ICI has since graduated 73 fellows—varying in age, ethnicity, location and economic background, with two-thirds of them women—from an intensive, personally demanding nine-month program.

With three cohorts completed, several interrelated themes have emerged: Systemic change must flow from the grassroots up; control must shift along with capital; cultural capital is a crucial lever; and personal relationships across identities are the key to building movement strength. These themes are playing out in fellows’ day-to-day work, as we found out in talking with several of them about their strategies for solving complex problems and the influence of the ICI network.

Grassroots Action Is the Path to Systems Change

Funders often see grassroots initiatives as too small and isolated to drive systems change, and invest instead in big, elites-driven solutions. That’s exactly wrong, according to Nwamaka Agbo, a restorative economics consultant and the newly appointed CEO of the Kataly Foundation.

“Funding grassroots projects is exactly what we need to do to make systemic change,” she says. “Resourcing them is central to the transformation that we are seeking to make with our work at Kataly and the Restorative Economies Fund. State policies and private industry initiatives in the past have focused their efforts on supporting the grass tops, with the implied assumption that change will trickle down to the bottom and into our most impacted and disinvested communities.”

The problem with that approach, she says, is that “in order to create systemic change we need to address structural racism and inequity at the roots of the problem, and those roots are in the same grassroots communities that we continue to pass over. When we address issues at the source of the problem, then we can create transformative change for everyone.”

Nikki Pieratos, managing director of the NDN Fund, the impact investing and lending arm of the NDN Collective, an Indigenous-led organization dedicated to building Indigenous power, also challenges the notion that smaller scale equals less impact. “NDN just celebrated our two-year anniversary, and the NDN Fund is less than a year old. We pushed out tens of millions of dollars in trust-based grants in less than a year. If you’ve been around for decades, especially the larger investors and foundations, I don’t see why it should take two or more generations to catch up with an organization that’s been around two years,” she says.

“If you want to lean in, that doesn’t mean come up with a plan 5 to 10 years from now. What can you do now? When I think about how much we’ve done in a short window, my call to action is ‘Get it together.’”

Control, Along With Capital, Must Shift to Communities

“Philanthropy is a byproduct of racial capitalism, with most funding flowing from white philanthropists to white-led nonprofits. We are trying to correct some of that imbalance by prioritizing Black-, Indigenous-, and people of color-led initiatives that center the solutions proposed by those communities,” says Chris Olin, who launched the Kataly Foundation with his wife, Regan Pritzker. “We also want to avoid the harm mainstream philanthropy often causes through its overly bureaucratic and technical funding practices, which reinforce the power dynamics between funder and grant seeker. This not only wastes the grant-seeking organization’s time, but it also can negatively impact the priorities of the project, which need to be determined by the community, not the funder.”

Matilde Olazábal envisions a community stakeholders board at the center of her new organization, Fondo Bienestar, which will support women textile artisans in Mexico. “The board will make decisions about where to allocate money based on a previously defined Wellbeing Pathway,” she says. “The need to democratize decision-making is key for me.”

Part of shifting power to communities is confronting and replacing the undermining narratives that are knit into structural racism. That work is personal for Leticia Corona. Until recently a Global Development and Population Fellow at the William and Flora Hewlett Foundation, Corona grew up in a family of farmworkers and small business owners in California’s San Joaquin Valley and comes from a long lineage of small sustainable farmers and small business owners in Guanajuato, Mexico. Now, as the Central California Regional Lead Advisor for the California Office of the Small Business Advocate within the Governor’s Office of Business and Economic Development, Corona leads strategy development for CalOSBA’s ecosystem-building work and is creating a model that will be replicated across California.

“Often stats are very negative in our region,” she says. “We tend to say we’re lacking talent and innovation, and we need to attract outside talent. But we ignore our talent that’s here, and then people leave because they feel like they don’t have opportunities. We need to invest in the people in our region and stop the brain drain. We need to attract the right capital, not just short-term investments. And we need to create a pipeline for people of color to become the investors.”

Pieratos makes a similar point about Indigenous communities. “When we talk about systemic change it’s not about reinforcing deficit narratives,” she says. “A lot of Native inventors have great ideas, but jurisdictional issues, treaties and federal policies have made it difficult for them to access much-needed resources in dominant culture systems. We’re thinking about how to work outside of those systems to activate the billions of dollars left on the table every year for development across Indian Country.”

Finance Is Ripe for Decolonization

Pew research released earlier this year found that 70 percent of Americans say the U.S. economic system unfairly favors the powerful, so it’s not surprising that those who have been systematically excluded often see little point in engaging with financial institutions, public or private. Here, too, ICI fellows are tackling the problem from a couple of different directions.

Corona is working to make sure resources are accessible not just technically but also culturally. “Latinx people are well known for starting businesses—their entrepreneurship and risk-taking are essential to driving California’s economy and keeping it strong. Many times when people come to the U.S., they’ve started businesses in their native country, but for them to be able to navigate all the barriers here is remarkable. Think about the potential if we dismantle some of those barriers.”

Those include, she says, a perception of access. “For me it’s very personal that people feel comfortable and welcome. Especially in our immigrant community, language might be a barrier but so is being afraid to ask questions. We need to ensure our partners are prioritizing the needs of the small business owner, meeting them where they’re at, and taking the time to really understand and guide the entrepreneur at different stages.”

Pieratos notes that nearly 40 percent of her tribal members are unbanked (compared with 7 percent nationally), and that’s true in cities as well as rural areas. “I spent months talking with community members about this and found that the lack of capital access was a lack of access to the customs, culture, dress, language and institutional language of predominantly white-led spaces. We have our own customs, values, systems and beliefs about wealth and inheritance. Entrepreneurs also have a social capital gap—they don’t have access to networks in the spaces they’re working in—which contributes to a chronic underinvestment in Indigenous companies.”

One of her projects is demystifying the loan process and documentation—translating legal boilerplate to something that’s easy to understand. She also has a larger decolonizing project under way: Instead of copying conventional credit standards, term sheets, project guidelines and impact metrics, her team is establishing frameworks and tools that align with the NDN Fund’s regenerative lending standards and Native cultures—terms customized to project needs; nonfinancial covenants, such as social and community dividends and multipliers; and blended financing deals based on trusted relationships rather than rigid box-checking.

Because the ICI focuses so strongly on connecting fellows as human beings, it’s a catalyst for “way bigger things,” says Pieratos. “Systemic change is not one group pushing a boulder up a hill; it only happens when we’re connecting across movements. When we think of the economic development or financial space, RSF is showing this is one model for the bigger space, a microcosm of the bigger movement building.”

Corona says RSF is a “bridge uniting our community across race, class, immigration status, profession, and geography.” She describes the ICI community as “a space for driving meaningful, impactful conversation about combating systemic racism by using our collective capital, resources, networks and privileges to drive change in our work and communities. Together, we are building a strong foundation to sustain this work for the next generations.”

In line with that vision, Erik Schultz, cofounder of the nonprofit SK2 Fund and chair of his family’s foundation, hopes to bring other small foundations into the movement to “shake up the paradigm of how foundation assets are managed” and “shake assets loose.” Most endowments, he notes, are passively invested in the stock market, “so 95 percent of financial resources contribute to maintaining the status quo and often amplify many of the problems your grants are trying to solve. We want to help show that you can have far more impact when you thoughtfully invest endowment assets to complement your mission rather than relying solely on making grants to effect change.”

Schultz makes a key point: The goal of the ICI is to spark a revolution to harness finance for social and economic good—and that means inviting everyone who has capital or who works with capital to get engaged. One way to start is the Money Transforms website, which introduces key concepts via a short video that RSF co-created with ICI fellows and Do Good Better. The tools and resources on Money Transforms make it easy to activate capital for good—because while the fellows are shining examples, anyone can be a financial activist.