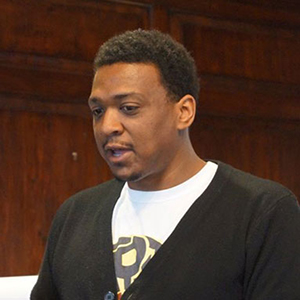 Dr David Ragland is a writer, scholar, activist, and educator. He is one of the co-founders of the Truth Telling Project and is currently the director of the Grassroots Reparations Campaign. He recently published a series on reparations in Yes Magazine. and currently teaches at Pacifica Graduate Institute in Community Liberation, Depth and EcoPsycology.

David’s work has been rooted in his home community near Ferguson, Missouri. He weaves his personal experience of growing up in segregated St. Louis with the history of that city and nearby Ferguson, explaining how Ferguson became the new center of American racism and Black resistance. In the early days of the Ferguson Uprising, David co-founded the Truth Telling Project so that marginalized voices could be heard and move society to lay a groundwork for healing, reconciliation and social transformation.

Recently, Georgetown University’s Advocacy lab included Dr. Ragland’s research as part of the “most important research on advocacy” in the last forty years. David was recently inducted into Rev. Dr. Martin Luther King Jr. Collegium of Scholars at Morehouse College. He served as the Senior Bayard Rustin Fellow at FOR and as a board member for the Peace and Justice Studies Association.