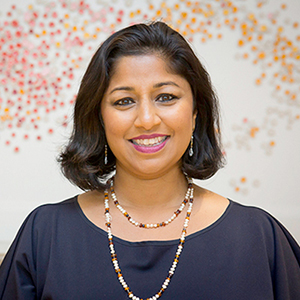 Rini Banerjee has been working in the philanthropic sector for the last 17 years. Currently, Rini is a strategic advisor at Columbia University, Mailman School of Public Health. From 2012-2016, Rini served as the first Executive Director of the Foundation for a Just Society (FJS). Rini led the start-up phase of this recently formed private global foundation funding women, girls and LGBT rights work in the U.S., Francophone West Africa, South + Southeast Asia, and Central America. Before joining FJS, she was a Senior Program Officer at the Overbrook Foundation, where she implemented and oversaw domestic and international grants portfolios in human rights, youth organizing, reproductive rights and justice, human trafficking, and progressive movement building. Previously, she was the Program Director at the New York Women’s Foundation, and held positions at UNICEF, UNDP, and at several community-based organizations working in the women’s rights and social justice fields. Earlier in her career, she worked as a financial analyst for the Investment Division of Citibank/Citicorp in NYC and marketing department at the Samuel Goldwyn Company. She is currently a Trustee of the Mertz Gilmore Foundation and Board member of the Funders for Reproductive Equity. Rini has been involved with co-creating and serving on many steering committees including establishing the newly formed Philanthropy Advancing Women’s Human Rights, Groundswell Fund, and the Funders Collaborative on Youth Organizing. She was the Board Chair of the Asian American/Pacific Islanders in Philanthropy (AAPIP) and past board member of South Asian Youth Action (SAYA!). She also co-founded the Asian Women’s Giving Circle in NYC. Rini has a master’s in International Affairs from Columbia University with a concentration in human rights and economic development and a BS in Finance from New York University’s Stern School of Business.