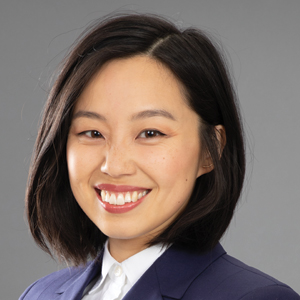 As the Just Transition Organizer at Justice Funders, Sydney Fang (she/they) amplifies the vision and values of the Just Transition framework within philanthropy, aligns resources with the strategy set by the Richmond Our Power Coalition (ROPC), and facilitates participatory grantmaking processes for resources stewarded by the ROPC.

Sydney is a part of a long lineage of organizers and advocates advancing just transitions, from “changing the story” at Asian Pacific Environmental Network (APEN) to “changing the rules” at California Environmental Justice Alliance (CEJA). She has spent over ten years advancing grassroots organizing and policy campaigns for racial, gender, and environmental justice.

She is the daughter of an immigrant from China and a refugee from Vietnam, a nail salon worker and a factory worker. A first-generation college graduate, Sydney is also the product of U.S. refugee resettlement programs, public housing, free/reduced school lunches, K-12 public schools, and the University of California system. She has Master’s degrees in Public Policy and Urban Planning from Harvard University and a Bachelor’s degree in Public Health from University of California, Berkeley.

On a good day, you can find her drawing (political) comics, wrangling media at direct actions, cooking a new recipe, or running with her partner.