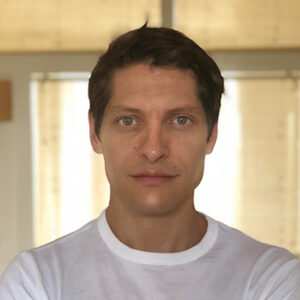 Juan Pablo de Tavira was born and raised in Mexico City, Mexico and was taught to always be in touch with the reality of inequalities in his country. Juan Pablo studied architecture at the Iberoamericana University and West Hill University, and began getting involved in political activism in his later university years. Juan Pablo participated in several student labor movements and collectives that helped him understand the conditions of working class struggles and the search for economic and social justice. His graduating thesis was based on a notable housing cooperative in Mexico, the Palo Alto Cooperative. He worked with members of this remarkable project to design a new stage of housing buildings to expand the cooperative to more families, using social production and urban agriculture methods that involve the community in all aspects of design and construction. These experiences got Juan Pablo involved in the cooperative movement and the study of social economy principles. Currently, Juan Pablo is finishing his master’s degree thesis on social economy and working on urban agriculture projects involving local neighborhood kids. He co-founded a Martial Arts social business and plans to expand this project to vulnerable and violent neighborhoods to help kids stay out of crime through practicing Jiu Jitsu. Juan Pablo sees himself as a facilitator of starting cooperative and social businesses, and his goal is to connect concerned and interested investors with viable and promising social businesses, which he believes will alleviate social and economic problems. Juan Pablo is also a strong defender of animal rights, a dedicated vegan and activist; he believes justice and empathy should be expanded to all sentient beings.