Sustainability is Not Enough: from Stewardship to Reciprocity 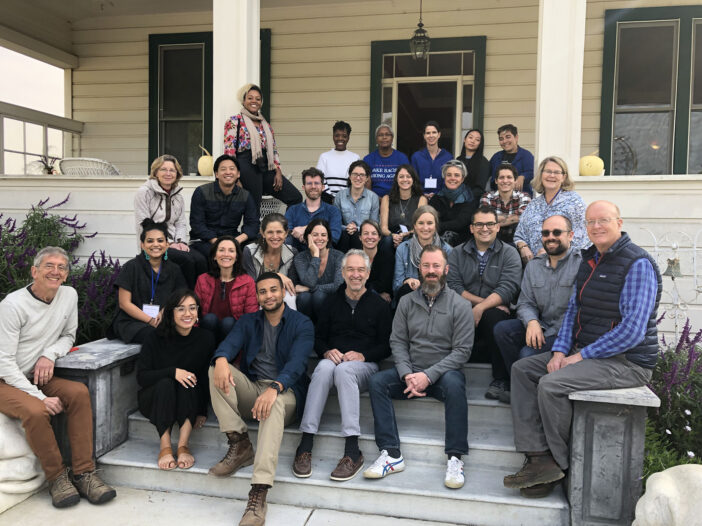 The following is an excerpt from a speech to the George J Mitchell Center for Sustainability Solutions, University of Maine at Orono, on November 28, 2022 by Roger Milliken (JEI alum, cohort 2, 2018-19)

I want to reflect on my experience caring for 150,000 acres of forest at Baskahegan, a company founded by my grandfather in 1920. Now that I am retired, I feel less torn by, and therefore freer to talk about the conflicts between economics and care for nature.  I want to invite you into a frank exploration of the tensions between Western cultures and the continuation of our lives on Earth.

We are living in a time of apocalypse.  You know the litany:  500-year floods coming every few years.  One third of Pakistan flooded and millions displaced. Intense droughts and catastrophic wildfires in Australia and the American West.    Last year on the coast of British Columbia, heat waves actually cooked marine animals in their shells …  The word apocalyptic fits these times, and not only its sense of “catastrophic.”  The other, the root meaning of apocalypse, is the removal of a veil that has obscured the truth.  Now, if we choose to look, we see what we have done and continue to do.

How much has already unraveled? How much will we continue to destroy?  Why?

I view our heedless rush toward the destruction of nature as a direct result of Western world views, based in individualism, separation and dominion.  These views drive our economic system to convert to cash as much of nature as possible, with little thought for the effects on future generations of humans—let alone the more-than-human world of which we are but a small part.

What do I mean by ‘separation and dominion?’    My sixth great grandfather on my father’s side arrived in Boston in the late 1600s, a Scots-Irish refugee fleeing poverty and religious persecution. He and the other settlers saw the lands and waters as other—to which they had rights but to which they bore no responsibilities.

How might it have been, I wonder, if my ancestors had arrived without the presumption that they were God’s chosen people, steeped in the language of Genesis that God created man in his own image…and said unto them have dominion …over every living thing that moveth upon the earth?  How would it have been if, instead of acting out of superiority, those early settlers had asked, with humility, curiosity and respect, “what does it take to live well in a place like this?”

If my ancestors had asked, they might have heard the wisdom that suffuses the writings of Potawatomi plant ecologist Robin Wall Kimmerer. She identifies the principles of the Honorable Harvest, which, she wrote, “govern our taking, shape our relationships with the natural world and rein in our tendency to overconsume—that the world might be as rich for the seventh generation as it is for our own.”  These principles are part of oral traditions conveyed by practice and carried by stories, but if they were written down, she says, they would likely include:

–Take only what you need.

–Harvest in a way that minimizes harm.

–Never take more than half.

–Never waste what you have taken.

–Sustain the ones who sustain you, and the earth will last forever.

But even if John and his fellow settlers had listened, embedded as they were in European world views, and surrounded by abundance “ripe for the taking,” they likely could not have resisted exercising their God-given dominion to extract wealth.

For many generations, things went well for people like my ancestors.  They became farmers and sawmill owners busily harvesting riches from the lands and waters, and waves of extraction followed.  Five generations later, my grandfather continued in the textile business his father had founded in Maine in 1865, and, in 1920, he bought 100,000 acres of timberland.  Continuing the ethic of wealth extraction, he had planned to cut the land hard to recoup his investment, but only six years into a 15-year contract with the local paper mill, he ran out of wood.

My elders faced the choice whether to sell the depleted forest or hold on.  Fortunately, the family textile company provided enough income that they could choose to wait a full three decades for the forest to grow back.  After that, my dad was determined not to experience the bust of a boom-and-bust cycle ever again, and it took considerable persuasion for him to even cut another tree.

Researching the history of Baskahegan, I talked with old timers and spent time in the woods with foresters.  Yale forestry professor Dave Smith, who advised our family for over 40 years, hinted at a felicitous marriage of economics and nature when he explained that forestry was “a kind of applied ecology.”  I learned that by observing how a forest grows when left alone, we could work with, not against, nature. In my father’s mind, we were rebuilding the value and productivity of the resource.  In mine, we were helping the forest heal from past abuses. There was no conflict between these two.

In the late 1980s, I made a pilgrimage to the office of every large landowner in Maine wiling to speak with me. My question was simple: What kind of returns could forest management generate over time?  From families who had owned timberland for generations as well as the paper companies who controlled one-third of Maine, answers fell in a relatively narrow band—from a low of two percent per year to a high of four percent.

I had begun work at Baskahegan in the early 1980s, when interest rates on ultra-safe Treasury bills approached an annual rate of 18%. I wondered how returns of two- to four-percent could possibly satisfy the 20 other members of my generation.  Knowing that we were all graduates of the first Earth Day in 1970, I brought as many of them to the land as possible, so we could inhale together the fragrance of the fir, hear loons calling across undeveloped lakes, and see directly the care we were bringing to the forest.  My generation’s environmental ethic, along with my father’s determination to rebuild the productivity of the forest, seemed to assure a special place for Baskahegan in the family’s investment portfolio.

Then, in the mid 1990s, financial wizards on Wall Street convinced the paper companies that their forests were—I kid you not—”unproductive assets.” More than a third of Maine changed hands as a new category of landowners arrived.  They were strictly financially driven and had neither the multi-generational perspective of family owners nor the paper industry’s commitment to a non-declining supply of wood.  The first Timber Investment Management Organization, or TIMO, proclaimed to Mainers that they were long-term investors.  Less than five years later, they had sold their lands.

The “genius” of TIMOs was that they recognized values in the forest that had yet to be monetized.  Where the paper companies had seen only a source of fiber, TIMOs saw shorefront that could be developed for second homes.  This caused a new wave of extraction and wealth capture to crash through the Maine woods.  When Mainers rose up against the loss of recreational opportunities they had enjoyed for a lifetime, the TIMOs pivoted and sold the most so called Highest and Best Use lands to state government and conservation organizations.  Over three decades more than $1.1 Billion, two thirds of it private philanthropy, went into the pockets of TIMOs and other landowners to protect these public values.  TIMOs lived the investors’ dream of buying low and selling high.

The TIMO model shifted financial expectations everywhere bringing us face to face with a market demanding a financial return completely divorced from the actual, biological rate of return.  And despite our long-standing culture of restraint, the pressure for higher returns crept into our family as well.  During the last years of my career, I felt torn between arbitrary financial pressures and our lived experience of the land.  Why is it so hard to accept the observation of economist Herman Daly, who said, “the economy is a wholly owned subsidiary of the environment, and not the reverse?”

For centuries my people have proclaimed the superiority of our intelligence, our world views, our sophisticated science.  For centuries, Euro-Americans assured ourselves, as our “manifest destiny” swept around the world that we were winning, we were getting richer, and that therefore we must be the smartest, the most fit, the ones most favored by God.

Now, as climate chaos lifts the veil, fires, floods, and extinctions show us what happens when we choose the extraction of wealth over the wellbeing of the communities of which we are a part.

But change is possible.  The writer Ursula LeGuin observed: “We live in capitalism.  Its power seems inescapable….  So did the divine right of kings….  Any human power can be resisted and changed by human beings.”

On a hopeful note, in my final year, Baskahegan entered the carbon market, making a binding 100-year commitment to not diminish the volume of trees that we had carefully built up over 40 years, an inventory that is well above that on neighboring lands owned by TIMOs and others.

Despite the unknowable future, what enabled my family to make this commitment?  First, the sale represented the only time that we had been rewarded financially for the restraint we had exercised, the trees we had left to grow, while our neighbors were cutting theirs.  Second, as a multi-generational family enterprise, Baskahegan values the wellbeing of our children and grandchildren as much as we do our own.  And third, we believe that a commitment to retain the carbon stored in our forest—and to sequester more—to make the world of 2122 livable, is in the best interest of us and all with whom we share this planet—human and more-than-human.

It’s hard not to notice that almost no other commercial forest landowner in Maine has committed similarly to capture and store carbon.  How can the market not demand a stable climate or resilient web of life?

Now that you’ve walked with me for a while, let me leave you with a few questions:

As we compare the world we were given to the destruction we continue to wreak, will we embrace—and live—the now evident truth that thriving can’t be just individual, but that all true thriving must be mutual?

Will we summon the courage to battle world views that prioritize financial return over the web of life of which we are a part and on which we depend?

Moving beyond individualism, separation and dominion, and away from the cold financial calculations that support them, and living instead from gratitude, love, and care, will we deploy ourselves in service to the Earth who gives birth to us, sustains us, and at the end will receive us back into her body?

Roger Milliken is the board chair of the Baskaghegan Company. In this talk, he explores the conflicts between a thriving forest—and society—and the traditional practice of forest management.  Building on perspectives gained from 40 years of forest management and conservation, he describes the tensions experienced by those who are called to care for the region’s forests in this time of high stakes and difficult choices. He invites us to confront the conflicts between seeing the forest as resources for our use or recognizing it as a community to which we belong.